President Rumen Radev discussed approaches for promoting the
investment interest in the transport, energy and digital connectivity
projects within the Three Seas Initiative during a videoconference call
with the Managing Director of the IMF Kristalina Georgieva. The Three
Seas Initiative requires the development of the investment fund and the
creation of business conditions, as well as the expert support of
international financial institutions to realise its potential, the President
underlined.

According to the Head of State, regional connectivity in transport, energy
and digitalisation will be sustainable when countries in Eastern Europe
are not only a consumer of technology, but also a real factor for their
development, application and implementation. He further emphasised
the necessity of close cooperation in the field of the scientific,
educational and R&amp;D activities in each country of the Three Seas
Initiative, which is among the priorities for Bulgaria as a host.

The Head of State highlighted the importance for countries in Eastern
Europe to bridge the educational and technological gap with Western
European partners, in order to achieve actual economic and social
cohesion within the EU. Then, attracting investments from leading
technological companies will be much easier, President Radev further
added.
The possibility for the Managing Director of the IMF to participate at the
business forum that will be held within the Three Seas Initiative Summit
in Sofia in the summer was also discussed during the meeting. 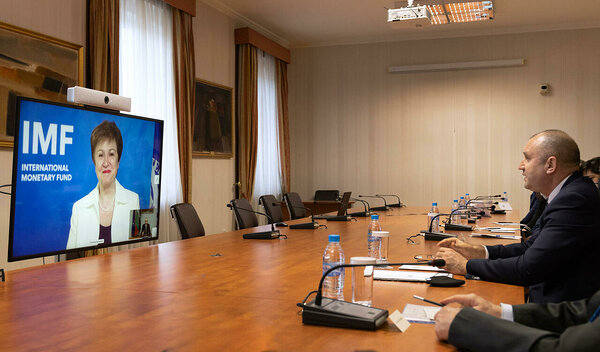